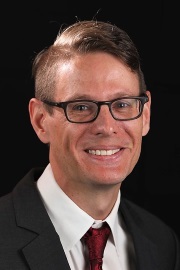 He entered the Western Australian Radiology training programme  in 2006 and in 2010 he completed his radiological studies. He then commenced a year long musculoskeletal fellowship training position at The Ottawa Hospital/University of Ottawa, Canada. He completed his fellowship training in July 2011 and returned to Western Australia joining Perth Radiological Clinic in August 2011. He became a Partner in 2015.

He completed his fellowship training in July 2011 and returned to Western Australia joining Perth Radiological Clinic in August 2011. He became a Partner in 2015.

What is the MBS item description for knee MRI?

Acute knee trauma in a patient 16 or older with:

Acute knee pain following an injury is a common clinical problem. Xrays are used to exclude fractures and are very useful in the acute period. MRI can safely and accurately diagnosis internal knee derangement, obviating the need for diagnostic arthroscopy if a “wait-and-see” management is adopted. This talk will briefly discuss two important elements of knee MRI, namely ACL tears and meniscal tears. 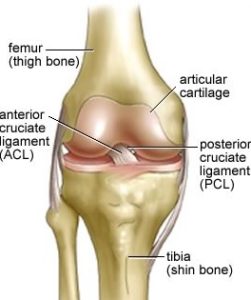 The anterior cruciate ligament is a key stabilizer of the, acting to prevent anterior translation of the tibia on the femur. The ACL runs anteroinferiorally form the posterior intercondylar region of the distal femur, to the anterior aspect of the tibial eminence. The ligament is composed of collagen fibres  coalesced into two discrete “bundles”, the anteromedial and posterolateral. The ACL is covered by synovium anteriorly and laterally but is actually outside the synovial membrane, analogous to the retroperitoneal portion of the duodenum. The ACL usually tears/fails in adults at its substance, or at its enthesis (insertions) in kids

Can plain films help with ACL?

What are the associated findings of ACL tears?

Associated findings of an ACL tear are commonly seen on MRI, and injuries to other important structures are also commonly seen. These include: 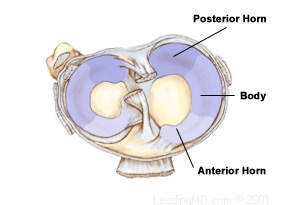 Normal menisci on MRI should:

Stability: by definition, all displaced tears are unstable, but many meniscal tears are potentially unstable

Remember, all tears are either vertical or horizontal, or a combination of vertical and horizontal.

Ancillary signs of a meniscal tear

Subchondral insufficiency fractures were previously called   Spontaneous Osteonecrosis of the Knee (“SONK”), a term radiologists try to avoid using (as it’s not spontaneous, and the major aetiology is not osteonecrosis)

Menisci in the Elderly

We would like to thank Dr  Nairn and Perth Radiological Clinic (PRC) for taking the time to put together this very useful summary article. PRC offers short waiting lists for MRI, urgent same day reports on request and has 11 MRIs in the Perth Metro area. All MRIs are reported by radiologists with specific MRI training. They have numerous fellowship-trained subspecialty MSK MRI reporters.

Users are welcome to leave comments below.